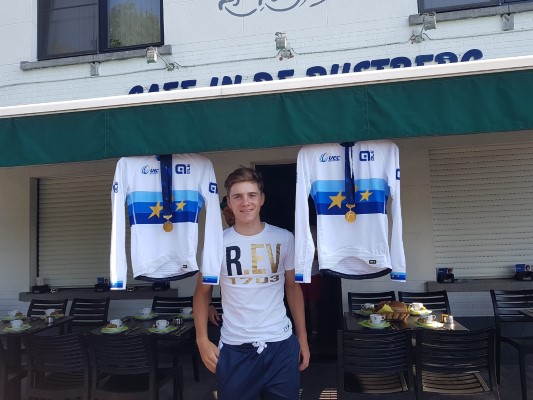 Quick-Step Floors and Remco Evenepoel have reached an agreement which will see the prodigious Belgian ride in the next two years for the outfit who since its inception in 2003 has amassed more than 650 UCI victories, including 83 Grand Tour stages, 18 Monuments and 3 World TTT Championships.

Remco’s path to the World Tour kicked off a little over a year ago, when he left football behind for cycling and quickly began racking up impressive results in both one-day and stage races. His feats caught the attention of Quick-Step Floors, who invited the young Belgian to the second winter training camp in Spain and kept following him in 2018, a season during which he proved to be head and shoulders over the competition.

Riding in his first full junior season, 18-year-old Remco began building a remarkable palmares, which now boasts both national titles, Kuurne-Brussels-Kuurne, Course de la Paix, Trophée Centre Morbihan, GP General Patton and two gold medals at the European Championships, in the individual time trial and road race, which took place in the Czech Republic. In the latter, he left a lasting mark after attacking on the opening lap and putting nearly ten minutes into his closest opponent, a result which heralded his potential and talent.

“In the past few days, I became European Champion and reached an agreement with the best cycling team in the world! I feel really lucky and ready to listen and learn from everybody, be it Mister Lefevere, my teammates, soigneurs or mechanics. I already know guys like Yves and Iljo quite well and met most of the team during last January’s training camp, so I just know I will be in the best hands, which makes everything very exciting ahead of next season”, said Remco, before giving some more information on his background.

“I started cycling last year, in April. Before that, I did only a bit of MTB during the football off-season. I played for Anderlecht and the National Team as defending midfielder, a position that requires good form, as you are running a lot. I switched to cycling as there was a moment where some people wanted to put me on the sideline and I was growing a bit tired of football. I wanted to try something new, to rekindle the passion for sport, so I told my parents that I would like to pick up cycling and immediately took my father’s bike out for a training ride. Then, one week later, we bought an old bike and I did my first race. I was hooked!”

Despite being very young, Remco knows the road that lies ahead is a long one, but he is ready to discover it together with Quick-Step Floors, after one more important appointment in 2018: “I will continue to enjoy the rest of the season, which already gave me a lot of satisfaction, and focus on my next big goal, the World Championships in Innsbruck, where I hope to get a good result. I know this is just the beginning and I have to work hard in order to make it as a pro, but I’m up for this challenge. The joy of the bike is the most important thing for having good result and achieving your dreams.”

Patrick Lefevere didn’t hide his delight at having Remco Evenepoel in his ranks throughout 2020, while stressing out that developing the young prodigy without rushing things will be one of the team’s priorities.

“His father is a former pro and we were in contact since last year, keeping a close eye on his progression and results. The family trusted us and me, which makes me happy, but also brings the responsibility of carefully nurturing Remco and helping him learn the ropes, as he needs to discover what pro cycling it’s about, one thing at a time.”

“Developing the champions of tomorrow has always been our mission, our philosophy, something in which we believe and put a lot of work and heart, and with Remco it won’t be any different. He knows that, as he could see that we treat everybody the same; it doesn’t matter if you’re a neo-pro or a well-established rider, you get the same professionalism and attention from our staff, because we are a family, not a factory”, concluded Patrick Lefevere